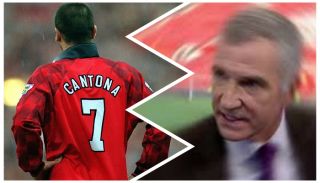 Former Liverpool player and manager Graeme Souness has revealed how he rejected a move to sign Cantona before he moved to England.

After an understated career in France, Cantona moved across the pond in 1992, signing for Leeds United after a trial at Sheffield Wednesday.

While speaking on Sky Sports’ The Football Show, the Scot said (via the Metro): “My story about Eric Cantona, I was manager of Liverpool, we’d lost 2-0 away to Auzerre, came back and beat them 3-0.

“After the game, there was a guy outside who said he was a good pal of mine, and it was Michel Platini. Not a close pal of mine, only time I came into contact with him was when I was in Italy, he was at Juventus and I was at Sampdoria.

“Anyway, he came in and said ‘look I’ve got a player for you, he’s a real problem boy in France but he’s really talented, he’d be perfect for your club.’

“I said ‘listen Michel, I’m fighting fires at the moment, trying to get some people out the door, they’re resisting, fighting a dressing room here.

“The last thing I need is another controversial figure in there. Then Eric went on trial at Sheffield Wednesday and ended up signing for Leeds and the rest is history.”

It’s a good thing he did refuse to take Platini up on his recommendation because he would go on to join Manchester United instead and we would be the ones to celebrate King Eric for over five years.

Cantona had found his kingdom. Laying the foundations for a period of dominance for United that spanned across three decades.

Sir Alex Ferguson turned out to be the perfect manager for Cantona. He got the very best out of him during his time at Old Trafford — which everyone will agree ended prematurely.

Meanwhile, Jamie Redknapp has claimed that Cantona was ‘not in the same league’ as Arsenal legend Thierry Henry.

Cantona won four Premier League titles during his time at Old Trafford before hanging up the boots at 31.

He wasn’t long out of the game by the time Henry touched down in the UK, but a discussion over the Premier League’s greatest foreign imports, Redknapp feels Henry is streets ahead of Cantona.

Speaking to Sky Sports, Redknapp said (as per the Mirror): “He had big moments in the Premier League, he was just different.

“You felt there was a bit of that arrogance he created, thee was so much mystique about him, you heard the rumours about him as a person…

“Look, I’m leaving myself open to a bit of ridicule here. I’ve played against a lot better players than him, trust me.

“But he just had that something special, in the big moments. If you’re comparing to someone like Thierry Henry, for example, I don’t think he’d be in the same league.

“But the influence that he had at United and the fact they still sing his name tells you how much he is loved at that football club.”

Redknapp added: “He [Cantona] wasn’t necessarily the quickest, he had a fantastic touch, he’d bring people into play.

“The big European nights, he perhaps didn’t have the influence on those games, the big occasions. But I think it was the all round belief he gave that United team.

“Until you play against someone and you see their talent, you see sometimes how great they are. That was the same with Thierry. Everyone could see it but also playing against him made you realise it even more.

“Eric like all great players had time. That was the one thing I always noticed. Every time the ball went close to him it felt like he had a second more than everybody else. He was an incredibly talented player.”