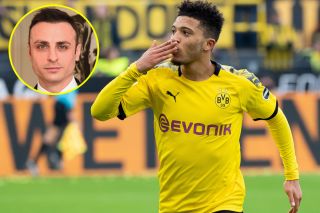 The former Belgium striker has a unique perspective having played in the Bundesliga and later on for Manchester United.

Prior to Berbatov’s big money move to Old Trafford in 2008, he spent two years at Tottenham, so he came to United already knowing what the Premier League was about.

Berbatov has suggested that Manchester United might not be the best fit at this stage of Sancho’s career which is only getting started.

He knows Sancho is a United target but has warned the winger that he may not get the first-team football he needs, due to the competition in the forward places under Ole Gunnar Solskjaer.

That’s despite Sancho emerging as one of football’s biggest stars, and the move did Wayne Rooney no harm in 2004, when he joined as the Premier League’s rising star aged 18.

Speaking to Betfair, Berbatov said: “Sancho is unbelievable, he has 14 goals and 15 assists, it is unbelievable, and it speaks volume about that way he is developing, the speed, the goals, the passing and his eye for the pass. He isn’t selfish, if you have 15 assists it must be because you play the ball whenever you have the chance and someone is in a better position.

“Sancho moved to Germany at a very young age and it looks to be paying off massively in the way that he is developing. That was maybe the best decision he has made so far, to go there and play because I think he, his agent and his family knew he was good enough to play and it was a great decision on his part, he is developing and now big teams are coming after him.

“I don’t know if now is the right time for him to go to Manchester United, I have mentioned it before, I have my doubts here because at United there’s Anthony Martial, Marcus Rashford and Daniel James.”

It’s hardly a surprise reading the quotes above that Berbatov went on to suggest Sancho should remain at BVB for another year.

“It’s good to have competition for the team but I would imagine if he moves to a new place he would want to play every game, but rotation is a common thing now in football. From that point of view, you can’t guarantee a player will play, but I think we need to go with the assumption, big money and he would like to play.

“For me, he is going to choose the team that he knows he is going to play. Not to move and do nothing because that is going to stop his development and that [is] why I think it may be better for him to stay at Dortmund for one more year, why not?

“It cannot make you think that somebody owes you something, even if you play every game you need to prove yourself each and every training session, you can’t relax and think ‘I’m the number one goalscorer, they can’t do without me.’

“In that sense, I didn’t think about transfers, so I stay there for almost five years, Sancho has been there since 2017 and it’s crucial to know him and his surroundings to know when is the right time to stay or go because this can sometimes can make or break a career.”

Do you think Sancho will leave Borussia Dortmund this summer? Let us know by tweeting @StrettyNews.