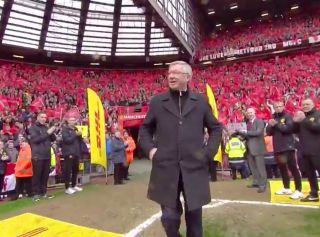 On this day in 2013, Sir Alex Ferguson walked down the Old Trafford tunnel for the final time as Manchester United manager.

The man who made the impossible dream possible received the special reception he deserved on a highly emotional and poignant day at the Theatre of Dreams.

Ferguson had already secured his 13th Premier League title before the penultimate game meaning it was a day of celebrations and farewells in Manchester.

Rio Ferdinand’s late goal against Swansea ensured Ferguson left with three points in his 723rd home game in charge of the Reds.

United regained the title from rivals Manchester City with an 11-point cushion, inspired by the goals of summer signing Robin Van Persie.

See Ferguson’s walk down the tunnel and his speech to the Old Trafford faithful below, courtesy of Manchester United.

7 years ago today, Sir Alex Ferguson walked out as #mufc manager for the last time. He made the impossible dream possible. The best there has been and the best there ever will be. pic.twitter.com/HpCK8HzYRC