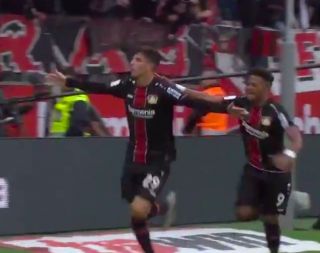 Manchester United fans will have their eyes firmly fixed on Jadon Sancho when the Bundesliga returns this weekend.

Sancho is back in action as Borussia Dortmund take on FC Shalke 04 on Saturday afternoon.

As reported by the Manchester Evening News, the 20-year-old remains a priority target for United this summer and the club still view him as an attainable option amid the uncertainty around the coronavirus pandemic.

The England international is seen as the perfect solution for Ole Gunnar Solskjaer’s void on the right-flank and could complete one of the most dangerous frontlines in European football alongside Marcus Rashford and Anthony Martial.

But perhaps United fans also ought to look another young Bundesliga star; Kai Havertz is another of the brightest young talents in Germany and is expected to feature as Bayern Leverkusen take on Werder Bremen on Monday.

According to the Evening Standard, Havertz is being tracked by United and could be a possible alternative if they miss out on Sancho.

The 20-year-old German international has already made 110 Bundesliga appearances in his fledgling career, scoring 30 goals and providing a further 24 assists.

What makes Havertz such an exciting option for Solskjaer at United is his versatility. As well as playing as a specialist attacking midfielder, the youngster is also adept playing on the right-wing and could therefore provide two transfer solutions for United this summer.

Check out his impressive Bundesliga highlight reel below, courtesy of BT Sport:

Kai Havertz has the world at his feet, and he's only 20 years old! 🤩 pic.twitter.com/GaN1wj9TmI