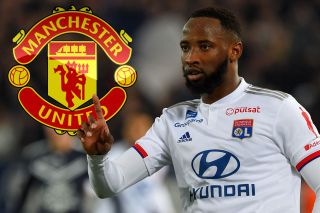 In strange times, a report we are happy to cover.

I penned a piece at the weekend urging Manchester United to make a move for Lyon striker Moussa Dembele in the summer.

The French striker would not only bring more goals to this United side, but if Ole Gunnar Solskjaer lands Borussia Dortmund sensation Jadon Sancho for the right-wing, we would have one of the fastest attacks in the world as a duo to help form a formidable front three.

A sight to behold I think most would agree, and it sounds like something Solskjaer has been working towards.

He adds that scouts have watched the Ligue 1 striker over the last few months.

Moreover, it’s great to hear Dembele has told United he would prefer a move to Old Trafford than Chelsea.

Hopefully true – Dembele would make a great signing for the Red Devils; along with the potential capture of Sancho.