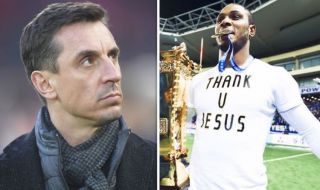 The former Man United captain went live on Instagram last night and was asked about whether or not Ole Gunnar Solskjaer should spend £20m on Nigerian striker Ighalo.

Neville was also asked who is worse, Donald Trump or Piers Morgan, to which he could not answer because he simply didn’t know.

On Ighalo, he said (via GOAL): “Is Ighalo worth £20m? Probably not in this market. He may have been if he continued before scoring goals but you probably don’t need now to spend £20m.”

This is not Gary saying he doesn’t think United need a centre-forward — because we do (!) — but Ighalo is 31 next month and he was always considered a short-term signing, made in January.

Although it’s going to be difficult with the transfer window bound to be affected by the coronavirus financial crisis, United should sign a more long-term striker who is a proven goalscorer. Someone to lead the line and guarantee 25+ goals per season.

I am not convinced Anthony Martial is yet that player and we can’t go into another season without a talisman up front. Marcus Rashford is best coming in off the left and I don’t see anyone taking that spot from him next season.

So, if Solskjaer has a similar view, Martial will need to fight for his place. A good thing considering how he responded to Ighalo’s arrival.

Solskjaer has a big call to make but I wouldn’t be surprised if he put more time into getting Sancho for the right wing. United could then have an almighty attack consisting of Rashford, Martial and Sancho.

Drooling at the prospect.