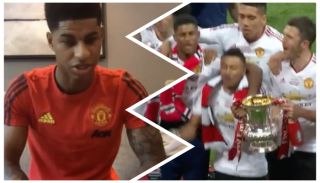 I don’t care for your hot takes, Marcus Rashford is a phenomenal footballer.

The England international is 22-years-old and this season I began to feel he was ready to be more than a prospect in this Manchester United team. Prior to the double stress fracture he suffered in January, Rashford was emerging as a leader on the pitch for Ole Gunnar Solskjaer and it has been a delight to watch his progress up until now.

He still hasn’t played with Bruno Fernandes and that combination will be fierce.

In an interview with MUTV, shared on United’s Instagram, Rashford was asked about his favourite moments as a United player.

He talks about the FA Cup win in 2016 under former manager Louis van Gaal and scoring goals in big games.

This is the sort of content the club has produced online since the lockdown and it’s nice to hear from our stars in the comfort of their homes. The official Utd Podcast is a great listen.