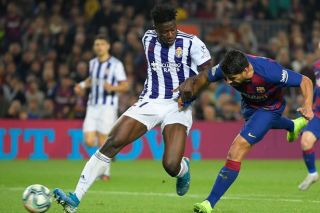 Firstly, I think a lot of the transfer news in the gossip columns is rubbish. We are in the middle of a pandemic without any clear indication that life will be normal again. That applies to football more ways than matches taking place behind closed doors or with fans, but the running of football clubs and their activity in the transfer market.

Manchester United are one of the wealthiest clubs in the world despite being weighed down by debt inflicted on the club by the Glazer family, but even the likes of Real Madrid and Juventus will need to manage their spending more appropriately in the coming transfer windows.

Ole Gunnar Solskjaer will want to bolster his squad in the coming months, so we are still excited by the prospect of new additions. Even if reporting on transfer speculation is beyond tiresome.

According to ESPN, United have made initial enquiries about the possibility of signing 21-year-old Real Valladolid centre-back Mohammed Salisu. This news emerges from the same report outlining that the Red Devils are in the market for a new defender to provide more competition for Victor Lindelof.

The 21-year-old is a regular in the La Liga side under Sergio Gonzalez. His form has attracted a host of interest from around Europe. Indeed, El Desmarque reported earlier in the week that Newcastle United were keen on landing Salisu.

Elsewhere the Mirror have some news that sparked some positivity on my Sunday morning stroll with Kurt, pictured below on yesterday’s walk, and it means Solskjaer is looking to get rid of more deadwood from his squad. Chris Smalling, Phil Jones and Marcos Rojo are all for sale this summer.

Smalling is the best of that bunch after having an impressive season in Serie A, hence why it won’t be difficult to find a buyer for the England international. Rojo’s an idiot. Jones gets a hard time but let’s not kid ourselves, he hasn’t turned out to be half the defender we wished for.

The Mirror have another report adding that United may look to Swansea defender Joe Rodon, who is the second under the radar defender to be linked with the club today. He has apparently been recommended by his Wales manager and United legend Ryan Giggs.

READ MORE: Opinion: Ligue 1 striker could be what Manchester United team is missing