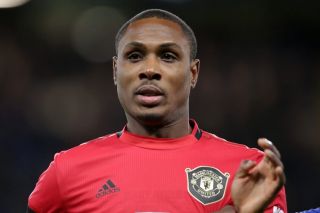 We have discussed Odion Ighalo’s future regularly but there has not been a lot to report as far as Manchester United are concerned. That is partly down to football being a state of unknown and I don’t think that bodes well for the Nigerian’s probably wish to remain at Old Trafford.

According to Sky Sports, Shanghai Shenhua expect Ighalo to return from his loan spell in time for the start of the new Chinese Super League season, which is scheduled to begin in July.

I don’t doubt that Ole Gunnar Solskjaer wants to keep the striker at United because he’s been a hit since arriving in January, but Shenhua are not going to wait around and they rightly want their star striker back for the new campaign.

Sky Sports claim they will only allow Ighalo to stay at United if it is on a permanent basis and the CSL club value him upwards of £20m.

I can’t see United paying that amount on a 30-year-old when they will still need to sign a top goalscorer. It leaves Ighalo is in a sad situation because I bet he’d love to stay for a full season and maybe play in the Champions League.

It is added that Newcastle United could show an interest in Ighalo if their controversial takeover, involving Saudi investors, is complete this summer.

That said, you just know Newcastle are going to be linked with everyone once that deal is complete. Even PSG star Kylian Mbappe.