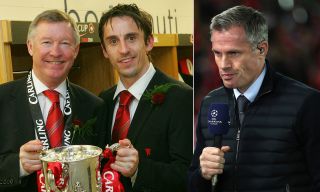 Jamie Carragher’s mouth gets him in trouble again.

The former Liverpool defender turned pundit joked the reason for Manchester United’s slump is because Sir Alex Ferguson is no longer the manager to intimidate referees.

Rather cheekily Carragher asked fellow Sky Sports pundit Gary Neville live on the Football Show: “Do you think the reason Manchester United have dropped off Gary is because Ferguson is not into referees now?”

Rather ignorantly, for a football pundit at least, Carragher carried on: “Well, how do you go from first to falling off a cliff to seventh or eighth now you haven’t got a manager intimidating referees?”

The Sun – the original source for the quotes above – also report that the conversation then moved on after Carragher revealed he received a message in his earpiece from one of the show’s bosses, advising him to be “careful”.

How can this man be taken seriously when he’s blabbing crap like this on TV? His interest in being a leading pundit on Sky Sports is dropping at an alarming rate because Sky’s banter bus show Soccer AM died a long time ago.

Sir Alex Ferguson is the most successful manager in Manchester United’s history. Let’s not forget that.