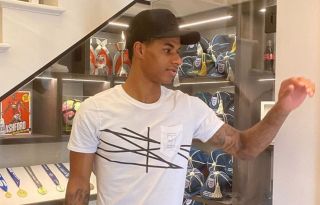 We need to add a Premier League winners’ medal to that impressive collection, Rashy!

At 22, Marcus Rashford may not be winning league titles like stars we seen before him, but he’s a key player in this Manchester United squad and has achieved a lot so far in his short career.

The United forward showed off his trophy cabinet on Instagram during the week.

It shows him boast his 38 England caps as well as his FA Cup, League Cup and Europa League winners’ medals that he’s picked up along the way with United.

Much to the delight to a lot of young people who football their favourite footballers on social media, players have been more active on social media and Rashford has done brilliantly by raising awareness on how we can stay safe.

Guys, 6 weeks ago I launched my partnership with @fareshareuk and I’m so proud of the progress we’ve made together. Today we are supplying over 2million meals a week to vulnerable people across the UK, meals they wouldn’t otherwise have (1)

This photo we are referring to was shared on Rashford’s Instagram.

In the photo, you can see all of his England caps and winners’ medals — as well as the bottles of champagne that I would love to find my way to (he received those for Man of The Match performances).

Wanted to take a decent pic without the dogs getting involved. This was the best we could do…🧐🥰 Happy Friday everyone!

Rashford has 64 goals for the club to his name already and it goes without saying that he could go on to be one of United’s all-time top scorers — up there with Wayne Rooney and Sir Bobby Charlton — but he’s got a long way to go!