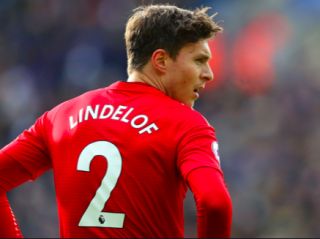 It has been reported that Manchester United have concerns over Victor Lindelof’s capabilities alongside Harry Maguire in central defence.

Lindelof, 25, signed a new contract in September and has played a prominent role in United’s impressive 11-game unbeaten run before football hit the pause button.

However, there are doubts as to whether the Swedish international is the long-term defensive partner for newly-instated captain Maguire.

According to ESPN, United are open to adding another centre-back to their ranks due to their concerns over Lindelof.

Lindelof has not convinced manager Ole Gunnar Solskjaer after a mixed season at Old Trafford. It is claimed that while Solskjaer is focusing on signing attackers in the summer transfer window, enquiries are being made about other central defenders.

United have two talented deputies in Eric Bailly and Axel Tuanzebe who should perhaps be afforded the opportunity to stake their claim as Maguire’s centre-back partner.

Lindelof is not expected to be sold after committing his long-term future to the club, but this report certainly raises some interesting questions.

And it appears that many United fans on social media share the club’s concerns over Lindelof. Some believe he is the weak link in Solskjaer’s defence and struggles against the more physically imposing forwards.

Come on man, Lindelof would get turned inside out against a high calibre attacker like Messi or Neymar. If we want to return to title winning form we need transfers. A centre half, defensive mid, and an attacker should be our areas of focus

Had a great year with Jose (although we setup more defensively) but under Ole he had been hit and miss. For me if can world class CB with DDG and Maguire we got foundation to build a winning team

I dont trust Lindelöf at all. Just everytime someone is taking him on i feel its 50/50. He also does a lot of weird passing where he puts teammates under pressure and they lose the ball. Would love to see him be a long term solution, but struggle to see it.

He’s not strong enough to face a big striker, and it’s time to Tuanzebe step up ⬆️⬆️⬆️

100% hes the weaklink, gets bullied by any physical striker

He’s neither dominant enough in the air or good enough on the ball. This is United not Everton. We can do better.