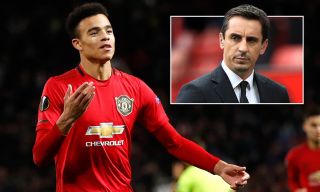 The Sky Sports pundit has identified three differences between the United pair.

Rashford is currently head of Greenwood in the pecking order but Neville, who is a fan of both players, says he believes Greenwood can be the real thing.

“I think Mason Greenwood is an outstanding player and the equal of Rashford at his age,” Neville told Sky Sports (via the Mirror). “In some ways more composed, a little bit more classy, less raw.

“He looks well above his age group in terms of the composure he’s demonstrated and temperament. I think Man United have got a real star there.

“We have been wrong before. We talk about Januzaj, we though he was going to be world class and he fell away. But there’s just something about Greenwood that makes me feel like he’s the real thing.”

One of my positives this season has been the emergence of youth, including Greenwood and Brandon Williams. Those two have really set the grade for their team-mates in the youth teams.

Next season they will likely get more minutes in the Premier League and that will help them both to grow.

We might see more clubs invest in their youth academies during this pandemic — and being less reliant on the transfer market as a result. It would be nice to get that core aspect of football back which would probably see all the transfer weirdos on Twitter erupt with rage.

This is a hard time for the players but I can’t wait to see Rashford and Greenwood back in action once it’s safe to play again.

READ MORE: Opinion: Ligue 1 striker could be what Manchester United team is missing