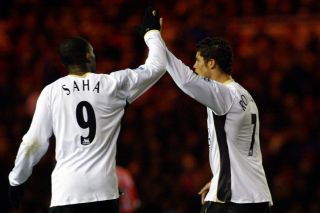 Louis Saha has opened up on his time with Cristiano Ronaldo at Manchester United.

The former Manchester United striker has revealed how Ronaldo always used to ask him to smile more, even when the latter was a youngster at the club, showing maturity beyond his years.

That level of professionalism is what has made Ronaldo the player he went on to be — winning five Ballon d’Or awards throughout his career.

Now 35, the Juventus star is trying to win the Champions League with a third club. Only Dutch legend Clarence Seedorf has achieved such a feat.

Saha speaks to MUTV about Ronaldo’s illustrious career, saying: “He always improved but I would say that his ways never changed [as a person].

“Throughout his career, you see the same dedication that he had when he was 18, maybe with less confidence as people were challenging him, and he had to prove that he was the best player.

“But to have that type of confidence to train, to work hard and to be consistent, no matter what people say, that was just an amazing skill. It was better than having talent because the way he was able to analyse, at that age, and grow and maintain those qualities – for me, it was genius.

“You ask anybody – working hard when you have that much talent, not everybody does this. You can get complacent or happy with your level and you think you have made it. But he wanted it way more.

“To have the vision to see something way more, when you’re already at United, at his age, it’s really hard. He managed to do that and that’s why I respected him so much.”

Speaking about that conversation he had with Ronaldo, Saha added: “Even though he was younger than me, I remember he said to me: ‘Louis you need to smile more when you play’.

“When the kids say that to you, when you’re older and have more experience, you say: ‘Hang on a minute.’ But I realised it was so true!

“During his career, he could be cheeky in the way that he spoke to people, and people just could not understand and got frustrated because they were not in his league. He’s so above everybody that, when he speaks normally it sounds strange for everybody. It’s amazing.

“His power and speed… the skills were one thing that are important in a career, but analysing when to do it – the timing and the precision – nobody can do that.”

Saha played with Ronaldo for about five years and we are sure he learned a lot about the Portuguese star during that period. The Frenchman was part of United’s squad in 2008 that won the UEFA Champions League. He also won the Premier League in 2007 and 2008.

He had played five times in that European Cup campaign in the group stages, but — after fighting to prove his fitness ahead of the meeting with Chelsea in Moscow — was unable to earn a place on the bench. Back to a time when United had several goalscorers in the one squad.

Saha ranks in third place for French goalscorers in the Premier League (84), behind Thierry Henry (175) and Nicolas Anelka (126).

Hopefully Anthony Martial will be able to surpass Saha on that list.