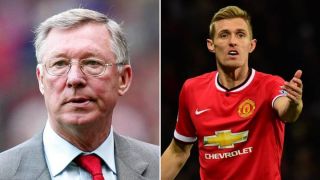 Sir Alex Ferguson gave a 15-year-old Darren Fletcher the hairdryer treatment when he contemplated leaving Manchester United for The Magpies.

Darren Fletcher says Sir Alex Ferguson swore at him when he was considering an exit from Old Trafford.

He was only a kid when he faced Ferguson’s wrath for pondering on a move to Newcastle United.

After joining United’s academy in 1995 the opportunity to leave came in 2002.

Not long before Fergie reacted.

Speaking to the Lockdown Tactics podcast, Fletcher said: “I nearly signed for Newcastle United. I had been going to United from the age of 12 and Newcastle at this point were the second-biggest team.

“Everyone is telling you, ‘look at all of these great Man United midfielders you’ll never get in the team, difficult to break through, Newcastle is closer to home.’

“I really enjoyed it there, great club, Sir Alex Ferguson at this point [2002] was going to retire. So the word gets back to Sir Alex and he phoned the house one night and my sister picked up the phone. ‘Here, Darren. It’s for you’. It’s just the boss going absolutely mental.

“I’m 15, just chalk-white and he’s f’ing and giving it to me down the phone. My mum sees me and grabs the phone and listens for a few seconds and goes, ‘don’t speak to my son like that ever again’, and slams the phone down.

“So the next minute the phone rights up again, it’s Sir Alex: ‘really sorry, Mrs Fletcher but we really like your son, I’m coming up on the next flight to Edinburgh.’ My mum’s looking around the house thinking, ‘I’ve not done the housework, I’ve got loads of washing’. She goes, ‘no you’re not, they’ll come down and see you’.”

Fletcher got caught in this hilarious crossfire and it doesn’t sound like his mother was going to back down. She was clearly within her right to defend her son and Fergie left it at that.

Thankfully Fletch decided to stay and ended up having a great career at Old Trafford — making more than 300 appearances and winning the lot.

Now he’s telling great stories on podcasts which can only inspire us to do our bit and try get him on the Strettycast as a guest at some point. The latest episode takes a look at United’s trinity: George Best, Denis Law and Sir Bobby Charlton.