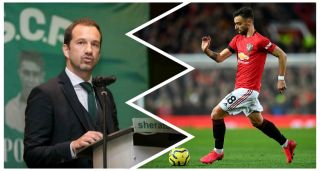 Bruno Fernandes joined Manchester United in January for a deal worth £55m plus €25m in add-ons, as per The Guardian.

But Sporting Lisbon president Frederico Varandas says that the playmaker would have been worth a lot less in the summer.

Speaking to RTP (via Manchester Evening News), Varandas said: “The crisis caused by COVID-19 harms the European football industry in general, but, of all countries, Portugal is the most affected, because fifty per cent of revenue come from the sale of players.

Let’s get one thing straight and waste no time in doing so. Varandas would have very different tone is Fernandes was still a Sporting player.

There’s no point crying over spilled milk because he’s acting as though they would have accepted €20m. All I care about is the fact Fernandes is a United player.

That deal was done in January and is already old news. Fans are fixated on who will be coming in next to join Fernandes.

Varandas was initially hesitant on letting Fernandes leave and played out a boring negotiation process before striking a deal with United a few days before deadline day.

We imagine Fernandes would have cost something a little cheaper but prior to football’s suspension he helped raise spirits around the dressing room. United were winning games again and playing good football.