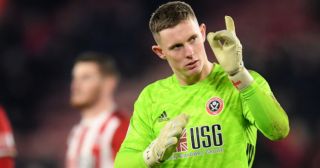 Dean Henderson has been a sensation whilst on loan at Sheffield United, achieving promotion to the Premier League and establishing himself as a proven top-flight goalkeeper. It comes as no surprise that Chris Wilder wants the shot stopper to remain.

The potential problem facing the Blades is that Manchester United are well within their rights to bring Henderson back to the club on June 30.

“It’d be morally correct to leave him playing at Sheffield United for the last ten games of the season,” Wilder is quoted as saying in the Daily Star.

“Although we all know that because of the legalities and the situation regarding expiry of loans, United might take that decision.

“But we’re not a threat to Man U so I’m sure they’ll be quite happy with the players that they’ve got to see them through the season. The Ford Fiesta ain’t going to get past the Ferrari!”

Sheffield United have a game-in-hand on the Red Devils and could overtake us in the table should they win that game.

I’m not using this as a reason for United not to allow Henderson see out the remainder of the season at Bramall Lane. Wilder is right in saying it would be morally wrong to take him back — and we’ve got David de Gea anyway!

Sergio Romero is a top backup to have and it’s only to see out the remaining fixtures, if they go ahead…

A decision doesn’t need to be made on Henderson right now. Everyone has bigger fish to fry. It would be ridiculous for United to call him back.

I wouldn’t be surprised if Henderson spent another season at Sheffield United. Another year out on loan before coming back to fight for his place?