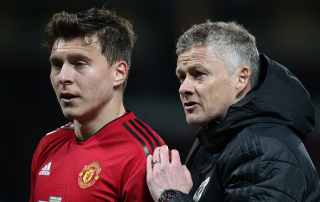 The Swedish international has had a mixed season with differing levels of performance, with many fans not convinced that he can be the long-term partner to the newly-instated captain.

Lindelof had been impressive during the unbeaten run of eleven games with United building momentum before the coronavirus pandemic forced football to hit the pause button.

And signing a central defender is not a priority for Ole Gunnar Solskjaer in the summer transfer window with the Norwegian more focused in upgrading his attacking options.

Alongside Eric Bailly and Axel Tuanzebe, Solskjaer seemingly has enough talented centre-backs at the club.

But according to ESPN, there are concerns over Lindelof’s form and United are open to the addition of another centre-back to provide competition for the 25-year-old.

Lindelof will not be leaving the club after penning a new long-term contract in September, but this report does not fill us with confidence over his United future.

Perhaps Solskjaer’s concern lies in his frequent inability to match physical strikers in the aerial battle or allowing forwards to run the channels in behind.

It is claimed that as a result of the Lindelof doubts, United have made initial enquires about other defenders, including Real Valladolid centre-back Mohammed Salisu.

The imposing Salisu, 21, has made 27 La Liga appearances in his breakthrough season at Valladolid and the youngster is highly-regarded as one of the most talented young defenders in Spain.

Salisu is certainly a player to keep an eye on, but Solskjaer may be better off promoting academy stars Tuanzebe or Teden Mengi into the first-team ahead of Lindelof before making a move for the Ghanian.

READ MORE: Gary Neville outlines what Man United must do to compete for title next season