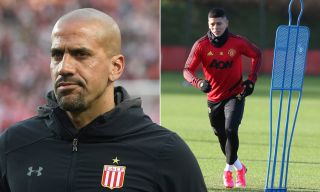 This week on the Strettycast — Marcos Rojo’s Corona Poker Classic — we tore into the Manchester United defender following his breach of lockdown rules.

Now Estudiantes president and former Man Utd midfielder Juan Sebastian Veron, who brokered the deal for his countryman to return to Buenos Aires on loan, has criticised the Argentina international and says he will be reprimanded.

Veron told local radio show Aca hay una escuela (translated by Metro): ‘There have been talks with the club about the Rojo situation. We believe that he is big enough and old enough to take care of himself and take responsibility for his actions.

‘I think he has to be a bit more careful because this is a very delicate moment for all of us.

‘You can’t show yourself playing cards with 10 people when we’re all indoors, especially when you’re a public figure.

‘In your private life, everyone can behave as they see fit, but it is obvious that if you are seen wearing a Boca T-shirt it does not give off a very professional attitude.

‘If you go too far, at some point — whether it bothers you or not — you will have to face the consequences. And the consequences could be a slap on the wrist or a fine.’

Rojo was seen smoking and playing cards with a group of friends in a video uploaded to Instagram by his brother, Franco, last weekend.

It has since been deleted but not before viewers screen-recorded the footage to share across social media. That’s right, Rojo, it’s out there for everyone to see for as long as the internet exists.

United will remind Rojo of his responsibilities — unless they’ve done so already.

To make matters worse for him at Estudiantes, Rojo was seen last week playing football with friends, wearing a Boca shirt.