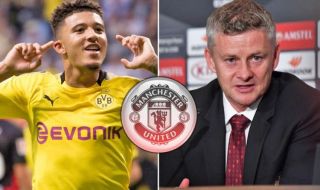 Manchester United manager Ole Gunnar Solskjaer has admitted the coronavirus pandemic is likely to have a huge bearing on the outlook of this summer’s transfer market.

This summer was shaping up to be a crucial window for the Norwegian as he looks to accelerate his rebuild at Old Trafford.

But United are not immune to the financial uncertainty around the pandemic and may have to alter their transfer plans or delay moves until next year.

Solskjaer has stated his intentions to improve the squad, but is happy with the goal returns of his frontline at the club.

“I think Mason (Greenwood), Anthony (Martial) and Marcus (Rashford) have been fantastic this season, they’ve scored up to 50 goals between them,” he said, as quoted by the Evening Standard.

“Marcus got his injury, on course for his best season, Anthony too, and Mason of course is just a unique talent with his goal-scoring ability.

“But we’re always looking to improve the squad. This uncertainty in the market now, who knows how football and the market is going to be, but I’m very happy with the squad I’ve got.”

Although there are concerns that United will not be able to acquire their top targets this summer, the Evening Standard reports that Borussia Dortmund sensation Jadon Sancho is still high on the list of priorities.

That’s despite the fact there are doubts that United will be able to spend transfer fees in excess of £60m.

United’s long-standing interest in Sancho has been widely reported and the 20-year-old would be the perfect player to fill the void on the right-flank.

Sancho could complete one of the most destructive front threes in world football alongside Marcus Rashford and Anthony Martial.

But United should also prepare for the scenario where they don’t sign Sancho in this summer’s window and have the necessary plans in place if they are to miss out.