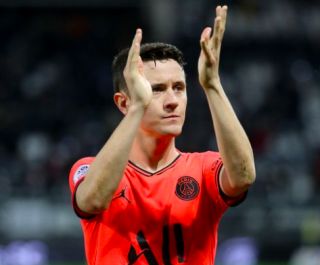 Ander Herrera has confidence that Manchester United can mount a Premier League title challenge in the near future under Ole Gunnar Solskjaer.

United are a remarkable 37 points behind runaway leaders Liverpool in the league, and 12 behind Pep Guardiola’s Man City.

In fact, the Reds remain on course for their worst points total in the league for 30 years with nine games still remaining.

This season’s league table alone would suggest Solskjaer’s men are lightyears away from being able to eclipse their biggest rivals at the top.

But United have turned a corner since January and were on an impressive 11-game unbeaten run before football hit the pause button.

United look a different side with the addition of Bruno Fernandes, who has shone since his move from Sporting Lisbon in the winter transfer window.

“I am optimistic,” Herrera told ESPN.

“I think they have signed some players who can bring the club back into the Premier League title race.

“Marcus [Rashford] is one of them. He has the quality and the maturity to make this step. It’s still a way to fight for the title because Liverpool and Man City are really strong.

“But I think they are on the way and have signed some players who can give a lot for the club.

“With Bruno Fernandes, a player I really like, and other players who are adaptable to the league, I think United can do great things. But the other teams are also doing great things like Liverpool, [Manchester] City and Tottenham.”

In Rashford, Solskjaer has a talisman that is one of the most dangerous attackers in the league on his day. His goal record has also improved too; the England international netted 19 goals in all competitions this season before his back injury.

Fernandes, meanwhile, is the missing link United have been looking for in attacking transition. He has won the Player of the Month award in each of his first two months in Manchester which is testament to the impact he has made.

But Solskjaer will be under no illusions that there is still huge work to do for United to claw the gap back on Liverpool and City.

Three or four top quality signings are required to complement the current crop before the Reds can be taken seriously as contenders again.