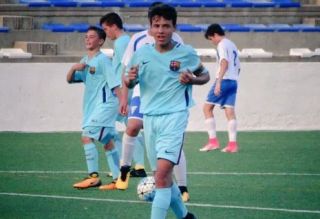 Earlier we brought you the news that Manchester United are set to complete a third youth signing of the summer following on from Radek Vitek and Joe Hugill.

The club is said to be closing in on a deal to sign Barcelona 16-year-old Marc Jurado, a product of the famous La Masia academy, who has rejected a professional contract with Barcelona.

Like all of us at Stretty News, you are probably looking for bits of information on the Barça youngster. So we’ve done a bit of digging and this is what surfaced online:

In April, Spanish publication Sport reported that United had sent a friendly e-mail to Barcelona asking about the teenage defender.

I guess, with Juardo reluctant to agree on terms with Barcelona sent alarm bells were sent around Europe.

United know that the Catalan Giants’ production line has brought through some of the modern greats. You only need to look to the likes of Andres Iniesta, Carles Puyol, Pep Guardiola and of course Lionel Messi.

However, Jurado hopes he can take a different route to football stardom.

Pique and Cesc Fabregas are two players who were whisked away to the Premier League when they were in their teen years. United are clearly hoping to be the ones to benefit this time around.

Manager Ole Gunnar Solskjaer has a long-term plan of rebooting the squad with youth, having signed Daniel James and Aaron Wan-Bissaka last summer — both aged 22 — and he has also brought several players from the youth side into the first-team squad.

That is why United will appeal to the best young players in the world. As long as they put a good graft in, they will get opportunities.

Check out some Jurado highlights below: