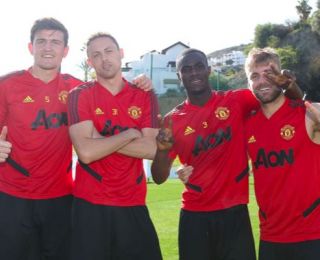 Luke Shaw has praised the impact Harry Maguire has made as captain of Manchester United.

Maguire immediately established himself as a leader in the dressing room after his arrival from Leicester City this summer.

And he appears to be thriving with the responsibility of the permanent captaincy handed to him after Ashley Young departed for Inter Milan in January.

Ole Gunnar Solskjaer finally has a leader in the heart of his defence who is prepared to demand high standards and marshal his teammates.

But it’s off the pitch where United have also benefitted from having the England international instated as captain.

United defender Shaw, who has enjoyed a resurgence in form since the turn of the year, has noted the fining system Maguire has now put in place.

“He’s really trying to make sure we get more things done together as a group going forward,” he told the club’s official website.

“Youngy was brilliant, really tried his hardest, but sometimes it was difficult to get things done as a group.

“Now we’ve made a pact that whenever a team bonding thing happens, we all have to do it or we get fined. It’s great for the team to be together and do things together.”

Team bonding off the pitch is important if United are to see togetherness on it and in all honesty it was strange that these events were not compulsory to attend in the first place.

But it’s great to see Maguire stamp his authority in his new role and United have reaped the rewards on the pitch since he was awarded the captaincy.

The Reds were flying before the coronavirus break; Solskjaer’s men are on an 11-game unbeaten run in which they have conceded just two goals.