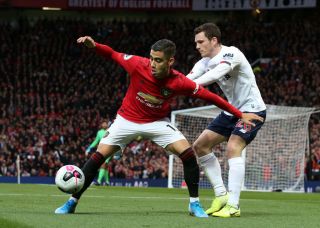 Andreas Pereira has done lots with Brazilian media over the past week.

United players are still in lockdown but they have all been asked to return to the UK this week, as reported by Sky Sports, with the Red Devils preparing before a date is released for a return to action.

Speaking to YouTube channel De Placa, the Manchester United midfielder was asked whether or not Liverpool should get the Premier League trophy despite the season being suspended for the time being.

“If the league was suspended, Liverpool should be declared the champions,” Pereira said as quoted by MU Tribuna.

In another interview he speaks about his dream to retire at Brazilian club Santos, and he’s already recognised as a Brazil international

The Premier League hopes to have football back by June but there is still a lot of uncertainty surrounding the situation, with footballers being asked to play without emotion, if games are resumed, as if they are a bunch of robots.

With or without a return of the 2019/20 Premier League campaign, Liverpool are going to be crowned league champions for the first time in 30-years. Gary Neville is hoping if it happens they’ll have a big asterisk beside their name in first place.

The Ligue 1 season has been cancelled with PSG given the title, whereas in Germany football will resume in the next week or two.

Agree with Pereira? Tell us what you think on Twitter.