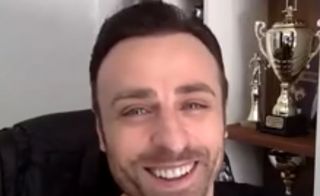 Dimitar Berbatov would have survived some of the newly proposed Premier League protocols.

It’s one we actually agree with because social distancing is key to fighting this coronavirus pandemic. At least that’s what the Irish government is telling us.

That raises the question, ‘How on earth is it safe for a contact sport to restart?’

Behind closed doors or not, you are going to have people in a football stadium on match day. Staff, broadcasters etc — there is no way they can make a difference to that.

Former Manchester United striker Berbatov has revealed that the only player he ever wanted to trade shirts with was Cristiano Ronaldo. They played together at Old Trafford for a year before the Portuguese star joined Real Madrid.

Asked to reveal his favourite players, Berbatov told MUTV: “The modern one, the one I played against who was number one? It was Cristiano Ronaldo.

“He was phenomenal, something else. He’s on a different planet. I never wanted to swap shirts after matches because I was not this type of player. But the one shirt I wanted and I got was his.

“I remember I was at Bayer Leverkusen and we were playing Real Madrid at the Bernabeu. I wanted Ronaldo’s shirt! But I was too shy to ask him so I got one of my team-mates to ask for it. I didn’t know what to say to him, but he gave it to me.”