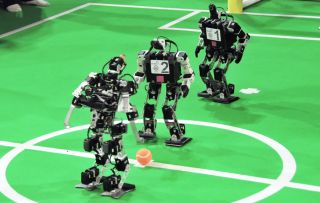 Thou shalt not spit nor celebrate.

Just wait for it. ‘We are having a VAR check to see if spit came from Harry Maguire’s mouth. It’s a close one, Jeff. Potential penalty and sending off if the experts deem it against fair play.’

We’ve heard Gordon Taylor’s suggestion that 45-minute halves could be shortened when football resumes, and that six of the bottom clubs in the current standings are against Project Restart.

Discussions about the Premier League’s return are ongoing but it’s important that they consult the players in the process. They are the ones at most risk if games are played behind closed doors and it feels like the Premier League is prioritising wealth over health.

You don’t need me to tell you that’s not a good look. The biggest domestic league in world football and people are shouting for an immediate return because the Bundesliga is back this month, as per Sky Sports.

The Premier League and UK government need experts. Not Boris Johnson or football suits worried about losing a few buck. There are people dying — at an alarming rate each day — and it feels weird that there’s an argument whether football matches should take place.

That brings us to a new report in the Telegraph which outlines that spitting, swapping shirts after matches, sharing water bottles and team celebrations are expected to be banned in the new Premier League protocols.

Is this the new normal? The game’s gone mad, etc, etc.

What’s going to happen when Liverpool score the goal to win their first league title in 30-years, or when Anthony Martial scores a hat-trick to put United back in the Champions League? It’s weird that we are at a stage that people are asking footballers not only to play behind closed doors but without any emotion.

Footballers are not robots. You don’t change a setting and charge it like you would with an iPhone.

Anyhow, the plans they are putting together may even be in place for up to 12 months — depending on what happens between now and then with this nasty virus.

The Premier League will reveal more details in due course.