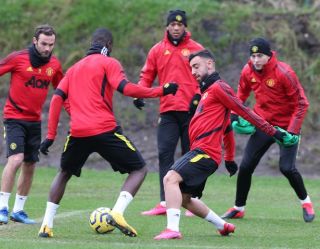 For the Manchester United players who left the UK due to the coronavirus, the club has asked them all to return to resume training.

That’s according to Sky Sports and the report doesn’t outline a specific date for the players to return, so all we know is that United will prepare as though Project Restart gets the go ahead — while six clubs are opposing to it at the moment, the Premier League only needs 14 ‘yeses’ for their plan to get the green light. Then it will be down to the government to pass or reject based on safety measures.

Fred, Bruno Fernandes, Victor Lindelof and Sergio Romero were all given permission to leave the country and return to their homelands in March, as the coronavirus began to spread (as far as the UK’s records are concerned). Many of these players went back to be with their loved ones instead of enduring lockdown on their own. There were obviously risks involved with travelling and that will be the same for their route back.

All players have been instructed to return this week with the Premier League aiming to restart in June.

Elsewhere, a meeting was held in Germany today over plans to play the remainder of the Bundesliga campaign while the country is in lockdown.

Chancellor Angela Merkel has given approval to brining back the Bundesliga, as per the Mail — with a decision to follow on when to start (May 15 or May 22). Some clubs are worried about the earliest date due to players fitness.

READ MORE: Opinion: Adidas – Is it time for Manchester United to move on?