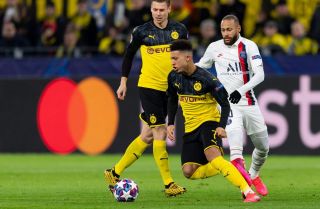 Jadon Sancho has been long linked with a move to Manchester United and we’ve been guilty of getting excited about the potential transfer.

But this is further proof that clubs will have to alter their transfer plans this summer following the coronavirus pandemic which is having a negative impact on business worldwide.

The Mirror have the latest Man United transfer news and it sounds like we’ll be made wait another 12 months before the club makes an offer for the Borussia Dortmund winger.

It is suggested that Dortmund are still demanding over £100m for Sancho’s signature, but United are said to be concerned about the finances of the deal and how it would be viewed by society as well.

For a club we often criticise, but always love, United haven’t put a foot wrong since the lockdown. From providing meals for the NHS to Jesse Lingard helping children with their spellings, they’ve done a really good job.

Sancho is the missing piece to United’s jigsaw up front but it may be time to look for cheaper alternatives. I know he has an expensive buyout clause but one player I have enjoyed watching this season is Valencia winger Ferran Torres.

That said, the report doesn’t complexly kill United’s pursuit to sign Sancho in the future.

This will just likely push the speculation trial on until January. The excitement has well and truly gone.