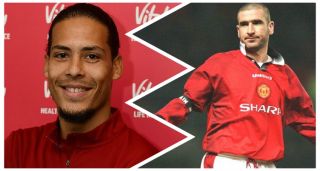 Former Manchester United defender Gary Pallister claims Virgil van Dijk can have a similar influence on Liverpool to the one Eric Cantona had on his club in the early 1990s.

Cantona arrived from Leeds United in 1992 and it didn’t take long for the Frenchman to be crowned the catalyst of Sir Alex Ferguson’s young side.

United needed a new striker because Dion Dublin suffered a terrible injury and Alan Shearer turned down a move to Old Trafford to join Blackburn Rovers. Then a chance phone call led to Cantona signing.

The rest as they say is history — but Cantona was a huge addition to bring a fantastic winning mentality to such a young side. His influence on the Class of 92 was huge.

Van Dijk joined Liverpool in a mega-money move from Southampton and he has turned Jurgen Klopp’s side from hopefuls to winners. Last season they won the Champions League — against Tottenham Hotspur in an all-English final — and this term they were on the verge of winning the Premier League title before the game was suspended in England because of the COVID-19 outbreak.

“He’s a bit like Cantona was for us, that final piece of the jigsaw,” Pallister told the Star. “Liverpool were looking for a really dominate centre-half to take them to the next level and they found that in Virgil van Dijk.

“I always remember a good friend of mine, Tony Mowbray, talking about Van Dijk a year or so before he went to Liverpool.

“He was saying, ‘I can’t believe one of the top teams haven’t bought him because he looks a real exceptional player’.

“Then Liverpool paid which seemed to be over the odds for his services and he has taken to it like a duck to water.

“He is a pivotal figure, a leader that you need in your back four, the final piece of the jigsaw. He has been superb since he has been there.”

Liverpool have a great defender in Van Dijk but United signed one of the best defenders in the Premier League last summer, with Harry Maguire joining and later becoming club captain after an expensive transfer from Leicester City.

People are quick to compare Maguire to Van Dijk but we’re not going to be silly and suggest it has any valid arguments.

The Dutchman is by far the best centre-back in the top flight and there are no two ways about it. That’s not to say Maguire can’t have the same influence at United and win titles.

We very much hope he can achieve that.