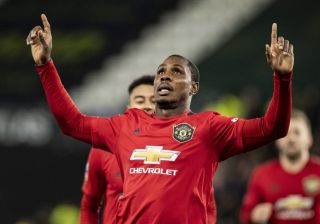 With football suspended and nothing but hope for a return date, Odion Ighalo has entered the last month of his contract at Manchester United.

The earliest football will return is June and Ighalo’s loan deal will have expired by then, so it’s time to ask what is going to happen with the Nigerian striker or is his time up at Old Trafford?

I will be gutted for Ighalo if this spells the end of his United career. He arrived in January, absolutely over the moon to be doing so, and offered Ole Gunnar Solskjaer something different up front and scored goals.

According to the Manchester Evening News, the Red Devils are relaxed about the situation because Marcus Rashford is fit again. That pretty much means he will be allowed to return to Shanghai Shenhua.

The Chinese Super League is now due to start in June or July and Ighalo, 30, could be on his way back.

It’s a shame because Ighalo didn’t get to play the games he would have hoped to when he joined United in January. This was a dream come through for the former Watford striker and it’s been tarnished due to the coronavirus.

Updates as we get them!