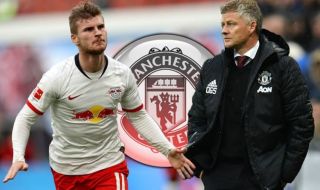 Manchester United manager Ole Gunnar Solskjaer is looking at a number of new striker options ahead of the summer transfer window as he looks to improve his front line.

One player who can’t stay out of the gossip columns at the moment is RB Leipzig striker Timo Werner. However, it was looking like his next destination would be Liverpool with Jurgen Klopp seen as an admirer.

But it was United who have made contact with the Germany international’s agent over a potential switch as well as Chelsea, according to BILD reporter Christian Falk.

Our Story: also @ManUtd and @ChelseaFC already contacted the Agent of @TimoWerner. The striker is still waiting for the offer of @LFC @BILD_Sport

He points out that Liverpool are yet to make an offer, which is something Werner appears to be holding out for rather than talk to the two Premier League clubs that are showing an interest in his signature.

Kevin Palmer adds that Liverpool will only make a move for Werner if one of their current front three leaves the club — otherwise they are ‘not likely’ to do any big money deals this summer.

Man United and Chelsea are the English clubs chasing Timo Werner, according to Bild.

He wants to join Liverpool but I’m told that will only happens if one of their front three leave. Big money deals not likely at Liverpool this summer #LFC #MUFC #CFC pic.twitter.com/v6Avm6mian

Werner has become one of Europe’s most sought-after strikers and in the current season, he has contributed 27 goals and 12 assists across all competitions for Leipzig.

This will have you believe that Werner is between Chelsea and United, but I still wouldn’t rule the Scousers out of the equation.

Werner is the future of the Germany national team, but we are still uncertain about his next club or if he’ll stay at RB Leipzig for another season at least.