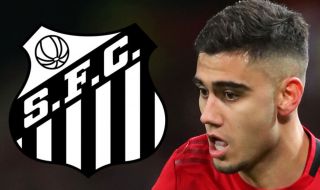 Andreas Pereira has spoken to the Brazilian media this week.

He was interviewed on Globo Esporte’s podcast GE Santos which is made for fans of Santos.

Andreas doesn’t hide his wish to play for the Brazilian side in the future.

A player who is in and out of Ole Gunnar Solskjaer’s team, struggling to provide moments on the pitch fans crave, Andreas reveals there are other clubs he’d like to play for, though none of them are in England.

“For now, I only dream of playing here. But of course, as a player, you would always like to play for another big club,” Andreas told Globo Esporte, as translated by Sport Witness.

“I really like Barcelona and Real Madrid, they are top teams too. Bayern Munich. But at the moment I’m, focused here at Manchester United. They provided everything for me since I was 16. So, I’d like to play here my whole life until I won everything here, then I’d go to Santos. So from here to play for another team in England, I think it’s difficult. I don’t think I’d do it. Not in England.”

At 24, Andreas has time on his side if he wants to play for a number of clubs. He doesn’t have the future at United he would have wanted because he’s not good enough to be a regular in the team.

There are better players in the team and I think Solskjaer will be looking to add even more quality for the bench as his rebuild takes shape.

Asked if his potential move to Santos is certain for the future, Andreas says he doesn’t want to wait too long to fulfil his dream.

“For me, it’s certain already. I want to end my career at Santos, but I’m not thinking as many say, that I want to play for Santos when I’m old. No. I want to go to Santos to win. Win the Paulistao and everything possible. I’m not going there to retire and steal money. I’m going to play well and people say: ‘remember Andreas at Santos?’

“My entire family in Santista. Whenever we’re watching a Santos game, there’s a family group that keeps talking. There’s criticism too, right (laughs)? Since I was little, I grew up watching this. I was becoming a player and always dreamed of playing for Santos,, but I went to Manchester, I grew up, then everyone said: ‘why won’t you play for our Santos?’ I want to go, but now I can’t. I want to do my football in Europe and then I go.”

Andreas will stay at United until Solskjaer decides it’s time to move him on because realistically he’s not going to play for a club this big.

He might dream of moves to Barcelona and Real Madrid but his chances of returning to Granada are greater.

The Brazil international was asked about what would happen if United face Santos in the Club World Cup one day, putting Andreas in a tough situation as it would involve the two clubs he loves.

“Then it’d be complicated. No, but if I had this situation… of course I will enter the game to win the game for Manchester United. But I would prefer that I didn’t even face Santos in the final. I was going to cheer for Santos, but I would be on Manchester United’s team playing. But on the other hand, I wouldn’t lose. I could only win. If Santos wins, if we win too.”

Sounds sure of himself, doesn’t he?