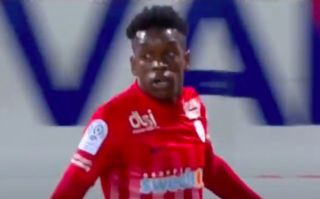 The France U21 international has starred in the Ligue 1 this term, helping his side to an impressive third place finish in a season curtailed by the coronavirus outbreak.

French outlet L’Equipe, as sourced by Sport Witness, claim Maouassa has his admirers at Old Trafford.

The 21-year-old is valued between €10 and €12m and has just one year left on his Rennes contract.

Maouassa recently gave an interview to Telefoot’s Julien Maynard, who asked what it felt like to be linked with clubs like United (quotes translated via Sport Witness).

He said:  “I don’t let it go to my head. It’s nice, I won’t lie, it’s really nice to see clubs like that be interested in you. It’s just a pleasure, really, but like I said, I’m really happy at Rennes, I feel good and I’m staying grounded.”

But United’s apparent interest in the youngster seems strange given the emergence of Brandon Williams this season.

The academy graduated has made the step up to Ole Gunnar Solskjaer’s first-team brilliantly and plays with a fearless aggression.

His breakthrough, alongside the resurgence in form of Luke Shaw, mean left-back should not be a position of priority right now heading into the summer transfer window.

And a report by Manchester Evening News has clarified that United are not focusing their attention on strengthening at left-back.

Regardless, Maouassa appears a top talent and is certainly a player to watch out for in the coming years.

Check out some of his highlights below, courtesy of WorldofFootballHD: