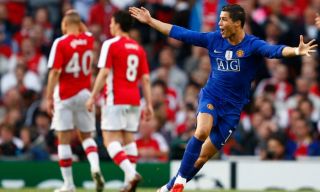 The Portuguese superstar ensured Manchester United’s place in the Champions League final for a second consecutive year — after winning it outright the previous season.

That two-legged semi-final clash is arguably the biggest set of encounters between United v Arsenal ever — and fittingly it was Sir Alex Ferguson’s side who advanced to the final after a convincing 4-1 aggregate win.

John O’Shea scored the only goal in the first leg at Old Trafford.

Arsenal’s had gone out the window inside the opening 11-minutes when Park Ji-Sung and Ronaldo both scored to put United 3-0 ahead on aggregate.

Ronaldo scored again on the hour-mark, before Robin van Persie netted a consolation goal for Arsene Wenger’s side.

Looking back at the goals — you would have to say they were both classics.

His second goal — one of my all-time favourites — came from a classic United counter-attack featuring Park and Rooney.

The first, as seen below, was a free-kick from at least 35 yards (footage courtesy of ITV).

ITV’s lead commentator, Clive Tyldesley, covered the game and made a comment just before the free kick which I’m sure he regrets to this day.

“It’s 35 yards or more,” Tyldesley said (via RedCafe) as he lined up for the free kick, “Too far for Ronaldo to think about it.”

The rest as they say is history.