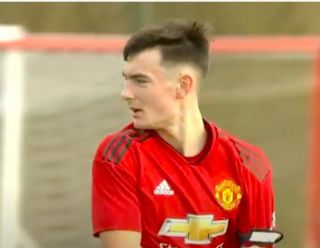 Manchester United have a number of special talents on the academy production line.

Brandon Williams and Mason Greenwood are two players that have made the leap to Ole Gunnar Solskjaer’s first-team squad this season, but there are plenty of players still in the development sides waiting patiently for their chance.

One of those is 19-year-old midfielder Dylan Levitt, who gave fans a glimpse of his talents as Solskjaer blooded the youth in a dead rubber fixture against Astana in Kazakhstan in November.

Alongside fellow academy star James Garner, Levitt bossed the midfield, making 100 successful passes, more than anyone on the field.

Levitt has already earned his first call up by United great Ryan Giggs to the Wales national squad and is thought of highly within the club.

The youngster has made the switch from U18 football to Neil Wood’s U23-side seamlessly over the last 12 months or so and has become one of the more senior figures in the side with many already progressing through to the first-team.

As you will see in the highlights below, what is most impressive about Levitt is his accuracy on the ball and his wonderful passing range.

Unfortunately, we have not seen any more of Levitt playing in the first-team but his potential is obvious.

We hope Solskjaer can offer the youngster a chance in the cup games next season, or alternatively loan him out so he can gain some invaluable first-team game time elsewhere.

See his best bits playing in the academy below, made by JML Football (footage courtesy of Manchester United).