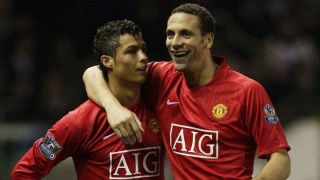 Rio Ferdinand has opened up on what he believes has kept former Manchester United team-mate Cristiano Ronaldo so determined to keep raising the bar after all these years.

At United they were part of the club’s most successful years and Ronaldo went on to continue such feats at Real Madrid — winning five Champions League titles in his career to date. He hopes to equal Clarence Seedorf’s remarkable record of being the only player to have won club football’s most prestigious prize with three different clubs by doing the same with Juventus.

Speaking to the Beautiful Game Podcast, Ferdinand said (quotes via Tribuna): “Talent wise you knew he had it. But the mentality he had was different; he had that elite thinking and programming. You thought ‘whoa’.

“This kid wasn’t satisfied with scoring as last minute winner at Fulham, he wanted to do it in the Champions League final or for Portugal in a major championship. The bar was always being raised and raised and raised.

“Even now when I still chat to him on the phone and I couldn’t even tell you some of the things he moans about.

“He’s conquered the game, but is still worried about what people are saying and worried about not getting the adulation he thinks he should be getting. But that’s the key to what drives people like this, it’s what makes him different to the rest of us.”

There’s no doubting Ronaldo has always had determination in abundance, but I do wonder how big of a role Sir Alex Ferguson played in pushing the right buttons to allow the Portuguese superstar blossom as a player.

It was at United he became football’s biggest star — scoring in the 2008 Champions League final against Chelsea — and it was at Real Madrid the world was gifted to football’s greatest ever player rivalry, when both Lionel Messi of Barcelona and Ronaldo of Los Blancos were at their best.

Even though his chapter in Turin is not finished, I do wonder where Ronaldo will end up next as I’m sure a move to the MLS will appeal before he retires from the game.

Inter Miami to link up with David Beckham? I’m sure Ronaldo will be looking to get into business when he retires as a player and such a move would open many doors.