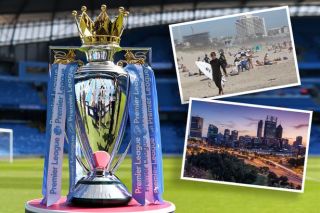 The Premier League is doing what it can to play out the 2019/20 campaign. It has been offered an incredible Plan B escape route — to end the season in Australian city Perth.

There has been talks with the Australian government to finish the season down under, with Perth state senator Glenn Sterle backing the idea despite the COVID-19 outbreak in the UK.

Sterle sounds confident about how Australia has controlled the coronavirus with reports of significantly lower numbers than the UK.

Whether they guarantee players would be quarantined or not, taking every Premier League squad out of the UK seems like even more hassle to finish the season and they haven’t got much time, but at least they are in a position to make a decision.

Sterle said (as per The Sun): “I’m watching what’s happening in England with a heavy heart. We want to help. We have almost no new cases.

“It would just be a case of some quarantine for our friends when they arrive and then we are up and running.”

Sterle added: “When Gary first mentioned it I thought it was a wonderful idea. I’m glad he is getting the same response from the people in the game he has called. This is the centre of the sporting universe in Australia. We have fresh air and good weather. It would be ideal.”

Although talks are said to be taking place, the report doesn’t state how serious the Premier League are about playing the remaining fixtures in Australia.

This Friday clubs in the Premier League will meet for showdown talks. Each club will be asked to vote on Project Restart — and there are six clubs already posing opposition to the PL initiative. That’s fine as long as the other 14 clubs don’t get cold feet — and safety measures are passed by the time they hope to restart.

What do you think about the idea to play the remaining Premier League fixtures in Australia?

READ MORE: Kevin Keegan: The legacy of loving it