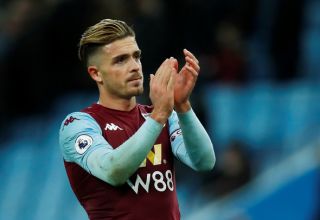 Gabby Agbonlahor believes Jack Grealish will remain faithful to Aston Villa and stay at his boyhood club beyond the summer transfer window.

Grealish has been totemic in Dean Smith’s side’s battle for survival this season, scoring six goals and registering seven assists.

But he is largely expected to leave Villa Park this summer, regardless of whether his side stay if the Premier League can reach its natural conclusion.

As reported by the Express, Grealish is a leading transfer target for Manchester United, who see him as a cheaper alternative to Leicester City playmaker James Maddison.

There is also a confidence that Ole Gunnar Solskjaer could land the 24-year-old in a cut-price deal if Villa are relegated and in need of funds.

But former striker Agbonlahor has little doubt that Villa will stay up this season and thinks Grealish will stay due to his loyalty to the club.

“I think he will (stay),” Agbonlahor told the Claret & Blue podcast, as quoted by Manchester Evening News.

“I know everyone’s 50/50 but I think he will because the club’s built around him.

“Villa will stay up and the club will be built around him again.

“He’s captain and he’s still posting photos of him at the academy when he started when he was six.

“It’s similar to me, I had chances to leave but, when the club means that much to you, the grass isn’t always greener.

“I think he will stay but I can’t speak for him, it’s his decision.”

We think that Agbonlahor is perhaps looking through claret and blue tinted spectacles when it comes to Grealish’s future.

If the widespread reports are to be believed and United are chasing him this summer, then Grealish has a fantastic opportunity to further his career and a move to Old Trafford would surely be too difficult to turn down.

Grealish may also have ambitions to play for his country and break into Gareth Southgate’s squad ahead of next year’s delayed European Championships.

Joining a higher-profile club will certainly increase his prospects of playing for the Three Lions next summer.

READ MORE: Howard Webb reveals the one Man United refereeing decision he regrets the most