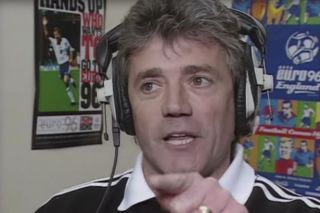 On the 29th of April 1996, Newcastle United managed to keep alive their hopes of winning the Premier League. Five defeats in the previous ten games before that had shaken the previously smooth title procession they had been on for most of the season. It had got to the point at which Manchester United had caught up with them and overtaken them. With the threat of another year without silverware on the horizon, victory at Elland Road was essential to stave off talk of a failure.

The home-side had been having a wretched season up until this point. After an initial promising beginning, the wheels came off from Christmas onwards. A run of only two wins in the new year saw them slip down the table and away from any potential European qualification. Newcastle’s hope of a trophy was dashed by a miserable display at Wembley. Not much was expected of their away trip at Old Trafford where United were on a great run of form. Especially when Mark Beeney was sent off early in the game to be replaced by defender Lucas Radebe in goal. A hat full of goals was anticipated. Not to be. The Yorkshire side defended like their lives depended on it. Only a single goal thanks to a precision effort from Roy Keane separated the sides. Ferguson was keen to point out that if Leeds had played like this for the rest of the season, they wouldn’t be as low in the league.

In yet another game where the pressure was off them, the home side raised their game. An early Keith Gillespie goal for the league chasers would normally have settled nerves and eased tensions. It did nothing of the sort. Much of their play was fraught with mistakes and poor judgement. But as much as Leeds attempted to level up affairs, it was ultimately in vain. The Geordies did much about enough to get the three points and keep in the race. Without being convincing or having the swagger of potential champions. A microphone was inserted into the face of manager Kevin Keegan, he lost the rag and a moment of TV gold was created.

Up until that point, Newcastle had been seen as being the people’s champions and everyone’s favourite second team to support. Not particularly a title I really thought much of. Being a United supporter, your team was usually to be feared or despised. That was when they actually achieved success. When they lost or finished runners-up, they were subject to ridicule. Hated….adored….never ignored. This title seemed to coincide with the rise in popularity that football experienced in the early to mid-nineties. A new breed of ‘fan’ emerged and many celebrities and public figures seemed desperate to associate themselves with the game. Most of which wouldn’t have given a rats ass about it a few years prior.

And some were dubious about the hysteria surrounding this particular Newcastle side and Kevin Keegan. It is true they had built up a hugely impressive side since being promoted into the Premier League. A canny mix of experience, promising and exciting young players from around the leagues and local lads had enable them to sweep home and maintain an impressive hold in the top-flight. The backing of Sir. John Hall had enable them to have a clout many others lacked. Not exactly an organic growth. Fans received plaudits for their passionate support and full houses at every home game. Attendances pre-Keegan being as low as 15 to 20 thousand was quietly ignored. He was seen as the catalyst for all this success. The messiah coming back home again after he finished his playing career at the club. He became known for leaving clubs when it best suited him but was generally well-liked and regarded.

Since gaining promotion, they had proven to be a sticky prospect for the reds. Indeed, only losing once in the two years playing against them. A third-place finish in their first year was followed by a sixth place the following year. However, the transfer of Andy Cole to Manchester United when the club was handily placed had angered many fans and led many to question the future of Keegan. He had publicly expressed his frustration at the move. This no doubt led the club to put their money to good use. That summer saw a number of big money moves to bolster the squad. Les Ferdinand, David Ginola, Warren Barton, David Batty and Shaka Hislop all arrived in the North-East. It seemed to have paid off in spades. By the end of January, a twelve-point lead opened up. But then they began to feel the pressure as Alex Ferguson’s young side begun to hit form at the optimum time.

As the interviewer prepared for his questions, Keegan hit back at Ferguson, claiming that he had stated that Leeds were going to roll over against Newcastle because of their traditional loathing of United and an objection over their rescheduled game against Forest. The reds boss had gone down in his estimation because of slanders against players and that his side still had to visit Middlesbrough on the last day and get a result. And he would ‘luv it’ if Newcastle had won the league ahead of them. Of course, as history proves, Newcastle only managed to draw in the Forest game. On the final day, the red devils won 3-0 away at Teeside and Newcastle only managed another draw at home to Spurs. This outburst showed that the pressure had got to him and it came out in this unfocused rant on the TV cameras. It heightened the pressure on their side and were unable to cope with it.

It seemed to have been the peak of Fergie’s mind-games and was not the last time it would be employed. Arsene Wegner and Rafael Benetiz were who were guilty of falling into traps laid by him in future years. As the psychology of the game became more sophisticated, managers were able to work around it in a sense. But others took on the lessons as well. Jose Mourinho became renowned for it in his spats with various managers. Ferguson was ahead of the game in many aspects of the job. Even almost a quarter of a century later, it remains an example of the genius of the man.