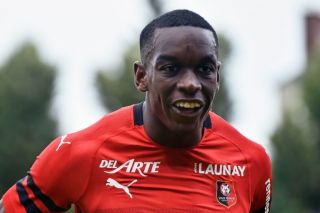 There was a time not long ago that Manchester United fans were not sure of their options at left-back. Luke Shaw hadn’t shown the form that earned him a move to Old Trafford in 2014, which has a lot to do with the leg break he endured a year later, but the emergence of Brandon Williams has been a breath of fresh air.

Just before the season was suspended due to the COVID-19 pandemic, United were on a run of 11-games unbeaten, across all competitions. Williams and Shaw both played big roles in that, with the latter starting to play more often in a back-three.

It seemed to be working and I’m intrigued to see how Ole Gunnar Solskjaer sets up defensively next term.

The manager gave Williams the stage to perform and it has proved to be a masterstroke. The youngster quickly became someone Solskjaer could rely on, even in the biggest games against Man City.

This is why I’m unsure about claims Manchester United are looking at a left-back in Faitout Maouassa.

Reports initially surfaced in French newspaper L’Equipe back towards the end of April that United were among a list of clubs keen in the France U21 star after a great season with Rennes.

The French season ended early over the coronavirus pandemic, so Rennes finished third and qualified for the Champions League. If he doesn’t leave this summer everyone will be watching to see what he’s made of in Europe next term.

Maouassa gave an interview to Telefoot’s Julien Maynard, who asked what it felt like to be linked with clubs like United (quotes translated via Sport Witness).

He said: “I don’t let it go to my head. It’s nice, I won’t lie, it’s really nice to see clubs like that be interested in you. It’s just a pleasure, really, but like I said, I’m really happy at Rennes, I feel good and I’m staying grounded.”

Maynard pushed with his interview — wanting to know if there are any clubs that could lure him away right now.

“With the season we did, I think we’re all a bit sought after, but personally, I’m happy at Rennes, we’ve got the Champions League, there’s no real reason for me to go seeing as I’m really happy here.”