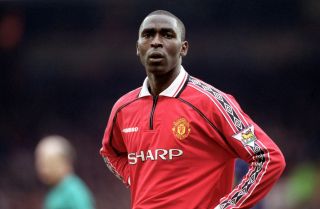 Former Manchester United striker Andy Cole says Ole Gunnar Solskjaer’s side will be challenging for top honours again within the next few seasons.

He doesn’t think United will be made 30-years like Liverpool, with the Scousers on course to win the title before the campaign was suspended over the coronavirus pandemic.

As things stand in the Premier League, United are fifth but it’s our form before action stopped that has everyone talking.

The Red Devils were on an 11-game unbeaten streak, helped by the performances of new arrival Bruno Fernandes in midfield as well as on-loan striker Odion Ighalo.

United are still 37 points behind leaders Liverpool, who will need to wins to secure a first top-flight title in three decades, if and when the season can be resumed following the COVID-19 crisis.

And, with the future of English football uncertain, we still don’t know what will happen with the title and relegation if the season cannot resume?

But Cole, who won five Premier League titles during his time at Old Trafford, says United will be challenging for the top honours again within the next few seasons.

“There is definite progress being made. It is all about making small steps,” said Cole in an interview with Sky Sports News.

“When you are talking about challenging for the league in the next few years, I would genuinely like to believe so.”

The last time United won the Premier League was in 2012/13, which was Sir Alex Ferguson’s final season in charge before he retired.