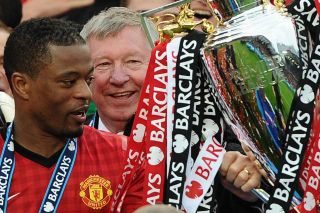 Patrice Evra has opened up on how Sir Alex Ferguson changed his mentality and helped him become a true winner after moving to Old Trafford.

Former Manchester United left-back Evra admitted he stopped celebrating league titles properly after Fergie taught him to be a ‘robot’.

In the same interview on the official UTD Podcast he admitted that his agent instantly regretted taking him to Old Trafford because he thought it was too big of a club for Evra, who struggled at the very start before going on to be the world’s best left-back.

Evra won five league tittles during his eight years at United and recalled celebrating ‘like a kid’ at Mikael Silvestre’s house when he won his first Premier League in 2006/07.

But it sounds like he then got used to winning league titles, so much that he didn’t celebrate them on the same level again.

“I’ll be honest, when you start winning the third one, the fourth one and the fifth, you celebrate but not the same way,” Evra said on the latest podcast, as quoted by GOAL.

“You celebrate because of the cameras and stuff, but it’s not the same. Ferguson taught us all to be like a robot. I don’t think I was a human being playing for Manchester United. When we won games, when I was doing something good, I wasn’t pleased. For me, it was something normal.

“I always say that Deschamps taught me winning is important, but Ferguson taught me that winning is normal. I remember after big wins against Liverpool he just said, ‘Well done, son’. He was never screaming, apart from when we won the Champions League final. It was just something normal, winning the league.”

Evra was a fans’ favourite during his time at Old Trafford. He knew about the club’s true values and history.

“So every time I was putting this shirt on, and I know how many people have worn this shirt and won,” he added. “Respect this tradition, the philosophy. I was like, ‘I can’t let down those people’. When you play for Manchester United, it’s not for you.

“You don’t use Manchester United, and because you’re a United player so you’re famous, you’re on social media. You play for United because you have to give to those people.

“I give you one example: once when we were in pre-season, and before we came on the bus, we were really tired, I’ll be honest with you, and there was a queue of fans. And the players were like: when no one signs, no one has to sign.

“So we went straight to the bus, everyone, and I look out the window and I see Sir Alex Ferguson signing each autograph. I swear he must have signed for like 45 minutes. He was signing [for] everyone.

“I say, ‘Guys, when the boss comes on the boss, we are done.’ And he came on the bus, he gave us the hairdryer. ‘What the hell do you think you are?! Those people are paying your salary. Those people are coming to watch you. Now get the f*** down there and sign.’ And we had to sign each fan. But that’s the mentality.”

Ole Gunnar Solskjaer’s first big job at United was the change the mentality in the dressing room. He’s done a good job at that considering the team is a lot more likeable than it was a year ago.

The progress we are making is clear.