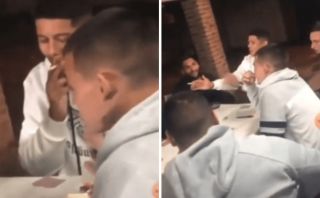 Manchester United plan to have stringent talks with Marcos Rojo after the Argentina defender was caught violating lockdown and playing poker with his friends.

According to the Manchester Evening News, after seeing the leaked video online — of Rojo not only participating in a mass gathering but also smoking — United will talk to the defender and remind me of his responsibilities as a role model.

Rojo appeared to be shown in a video leaked by Argentine radio station 221radio socialising with friends. I’m not sure who in the right mind would look up to Rojo as a role model after stunts like this. It’s incredibly stupid.

The Argentina international is currently on loan at Estudiantes, but United keep track of their players whilst on loan, and this really doesn’t look good.

I don’t expect Rojo to return after his loan spell and it wouldn’t be the biggest surprise if he stayed at his boyhood club Estudiantes.

He joined United in 2014 under Louis van Gaal and has thus far made 123 appearances for the Red Devils.

Injuries plagued his time at Old Trafford but his extremely rash ways made him a loose cannon. He was brave but a liability most of the time.

Ole Gunnar Solskjaer left him go on loan because he’s obviously not part of his plans for the future.