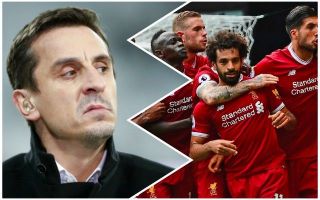 Gary Neville is a Red, he hates Scousers.

That’s how the chant goes and we are not going to try debunk it.

Former Manchester United captain Gary Neville has claimed he plans to mock Liverpool for winning a title during the COVID-19 pandemic — by wearing an asterisk on his suit in the Sky Sports studio next year.

It’s a joke but we hope he does it anyway.

“I think it would be ridiculous not to give Liverpool the league,” Neville said, as per the Daily Star.

“However, when you get to the bottom of the league, I think it would be equally ridiculous to relegate teams when it’s so close.

“We’ve seen the leagues have been awarded in other countries they’ve just null and voided it.

“I don’t think null and void will be an option with what’s happening at the Premier League level.

“I think it’s less painful seeing them win it this way, without crowds in the stadium, without me being there.

Gary never hides his sheer dislike for all things LFC.

Jurgen Klopp’s side are on course to winning the Premier League title, 25 points clear in the league standings, and it looks like they will get the crown one way or other.

The game is still suspended and while the Premier League is attempting to return to action, we could be some way off watching football the good old-fashioned way again.

Any plan to resume football will likely see games played behind closed doors for another while.

Liverpool fans will be sickened not to be in the stadium when their team is given the title which makes me giggle a little.

We might join Neville by wearing that asterisk badge on Stretty News TV next season!