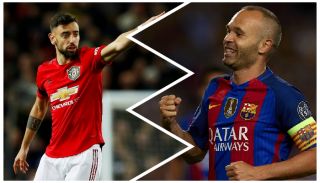 Manchester United star Bruno Fernandes has credited Barcelona legend Andres Iniesta as a huge influence on his playing style and admitted his best attributes can still improve when compared to the Spaniard.

Iniesta is currently playing with Japanese club Vissel Kobe, but is best known for his trophy-laden career at Camp Nou, where he took over Europe along with Xavi and Lionel Messi.

On the international stage Iniesta didn’t do too bad either, winning the European Championship and World Cup with Spain, making him one of the most decorated footballers in history.

Fernandes finds it hard to believe that Iniesta was never crowned as the world’s best player, but I don’t think anyone can complain about the individual awards being dominated by Cristiano Ronaldo and Messi over the past decade. Few come close to their levels.

Nevertheless, Fernandes wants to learn more from Iniesta’s game as he explains in an interview with ManUtd.com.

“The one I liked to watch and follow was Iniesta, because Iniesta is a mix between an eight and a 10,” Fernandes said in a Q&A. “It is a way I can do better, between eight and 10.

“It is the guy who always likes to have the ball, who always likes to take the risks, and I think Iniesta was one of the best in the world. For me, it was impressive how Iniesta finished his career without the Ballon d’Or [award]. With everything he won, it is difficult for me to understand!”

It was another former Barcelona midfielder who influenced Fernandes as a youngster. The great Ronaldinho.

“I have a lot of players I like to see,” he added. “For example, in my first few years, the player I think is the one everyone liked and always will like is Ronaldinho. For example, he is the player with the capacity to take you and put you in front of the TV, and you will stay for hours. For hours! Because he had that energy and happiness. He was happy in everything he did. You enjoy it when you see guys playing like that, so for the first few years Ronaldinho was my favourite player. After this, I have already said that Cristiano Ronaldo is one of the players. As a professional player, he is the best you can follow.”