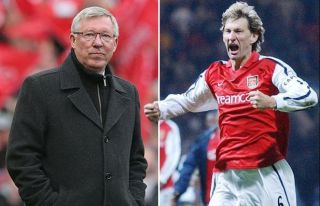 Arsenal legend Tony Adams has revealed how he snubbed a move to Manchester United twice in the 1990s.

Speaking to Sky Sports, he was taking about Pierre-Emerick Aubameyang’s potential exit this summer: “Alex Ferguson came in for me but I wouldn’t leave and I said to the chairman: ‘Have we got ambition at the club?’

“He said ‘don’t worry, we are injecting a lot of money and we are going to go for it.’

“I stayed and the rest is history — Dennis [Bergkamp] came and Nicolas Anelka, [Patrick] Vieira, Manu [Emmanuel Petit], Robert Pires — we had five World Cup winners in the team.”

They were all part of the great Arsenal sides that competed fiercely with Ferguson’s United.

Back when the Scot’s relationship with ex-Arsenal manager Arsene Wenger was a frosty one.

However, considering that Arsenal stars like Robin van Persie and Alexis Sanchez opted for moves up north to Old Trafford, Adams admits that a lot has changed.

“It is a completely different club today. I think recruitment at Arsenal for a good few years has not been great.

The latest Arsenal star linked away from the Emirates is Aubameyang. Even though it looks unlikely at this point, United are one of the clubs reportedly keen on the striker, as per The Express.

The Gabon international has been a smash hit for the Gunners since they signed him from Borussia Dortmund for a then-club record fee in January 2018.

He’s a prolific goalscorer and that is something Ole Gunnar Solskjaer should be looking to add to his squad, but don’t be surprised if they prioritise other areas of the team and sign Odion Ighalo on a permanent deal.

Aubameyang has scored 61 goals in 97 appearances but before the current campaign was halted over the coronavirus pandemic, Arsenal’s form dropped quickly and they now find themselves ninth in the Premier League.

Adams believes the striker could be off in the summer due to the club’s inability to challenge for the title.

“Quite possibly, he could walk out the door,” Adams continued.

“I loved [former manager] Arsene Wenger’s principles, that no player was bigger than the club, and he moved players on if it made sense for the club financially.

“He was strong with that and he got Champions League football every year but it did stand in the way of recruitment — so we have become a club that is selling the best players.”

Do you think, deep down, Adams regrets his decision not to join Fergie’s United? Tweet us @StrettyNews.