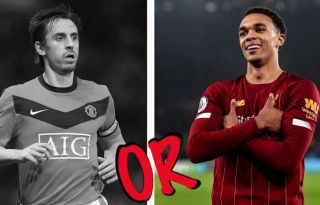 The Brazilian reckons the Liverpool starlet is “destroying” the Premier League. This season he has 12 assists and two goals in 29 games, which is remarkable for a full-back.

Rafael played alongside Neville during his seven years at Old Trafford and believes his former team-mate has set the bench mark for youngsters coming through the ranks.

“At the moment he’s just destroying the Premier League with assists, with everything. I have to be honest. So if he keeps going like that he’s going to pass Gary Neville as a footballer.

“When Gary Neville was young he maybe didn’t have the same qualities, wasn’t doing the same things that Alexander-Arnold was doing but he kept doing what he did for 12-13 years in Manchester and England.

“I hope Alexander-Arnold keeps playing well, not against Manchester United for sure, but if he keeps doing that he will for sure pass Gary Neville.”

I think that’s a pretty fair assessment from Rafael.

Right now, I’m picking Neville all day long but Alexander-Arnold has the ability to surpass the former United captain. It’s a long trail but he is the modern full-back who acts almost like a playmaker for Jurgen Klopp’s side.

If he keeps racking up assists for fun — season after season — and helps Liverpool win league titles, it will be an argument for another day.

Rafael is still playing for Lyon and United have a very good right-back of their own at the moment.

Aaron Wan-Bissaka may not get the same assists as Alexander-Arnold, although defensively he is a better full-back than the Liverpool man.

No question about that.