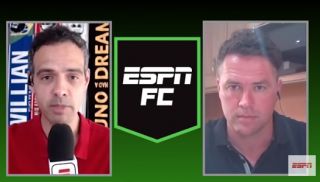 Michael Owen assess Ole Gunnar Solskjaer’s job at Manchester United this season — before it was halted by the coronavirus outbreak.

The former Liverpool striker, who had to joined United in 2009 to have any chance of winning the Premier League, says the Red Devils were hitting good form before the league campaign was suspended.

He’s right, United were on an 11-game unbeaten run in all competitions, still fighting for top four and in the Europa League and FA Cup.

Bruno Fernandes arrived in January as a fantastic signing and lifted everything at the club. That’s when Solskjaer’s results really started to pick up.

We also had a number of injuries to deal with throughout the season to some of our most important players. If the season was to resume at any point in the near future, you’d have to fancy our chances with Marcus Rashford and Paul Pogba returning to fitness.

Owen echoes those sentiments and says “it’s starting to look very good and promising for Manchester United” under Solskjaer, but admits he questioned things at the start.

Today he works as an ambassador for the Merseyside club.

I bet he loves bring your Premier League medal to work day!