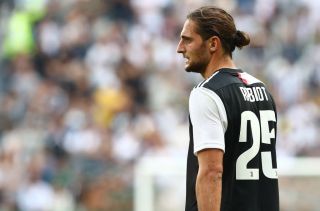 Manchester United are being linked with a move for French midfielder Adrian Rabiot again.

The former Paris Saint-Germain star has struggled in his first season at Juventus, and he’s apparently a player they are willing to show the exit door to in the coming months.

It remains to be seen if there’s any real truth in that, but Tuttomercatoweb claim Manchester United are among his strongest suitors, which could be solely down to the fact they showed some interest a year ago (via Bleacher Report).

This is not just a player who had fallen out of favour at PSG, but is form at Juve has hardly put United on red alert? Ole Gunnar Solskjaer has his team moving in the right direction now and I really don’t think Rabiot is the answer.

Reinforcements are needed in midfield but there are better options out there.

The 25-year-old joined the Serie A giants on a free transfer, so they are bound to make some profit if he departs in the summer.

This may be seen as an opportunity for United to get their man — but I think that ship has sailed and we dodged a bullet!

Who would you like to see United sign in midfield this summer? Send your views to @StrettyNews.