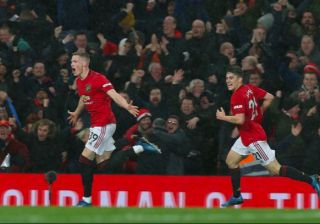 Manchester United are preparing for the worst-case scenario of fans not returning to Old Trafford for matches until at least February 2021.

The coronavirus pandemic has indefinitely suspended the Premier League and we do not yet have an indication as to when football will eventually return.

Things may become clearer on May 8 with clubs set to make a decision over a possible restart.

However, even when football does return, it will initially be in a behind-closed-doors setting with safety of foremost concern.

And according to the Mirror, mass gatherings may not be allowed until next year when a vaccine is found for the virus.

United are realistic and understand that their stadium, which holds a capacity of 75,000, might not be able to filled for another seven months as the UK attempts to come to grips with the pandemic.

It’s important the club prepares for all possible scenarios and as much as it is painful for supporters, a return to the Theatre of Dreams is unlikely for some months yet.

For now, United fans will have to hold on to their lasting Old Trafford memory of Scott McTominay sealing the Manchester derby victory with a special goal in injury time.